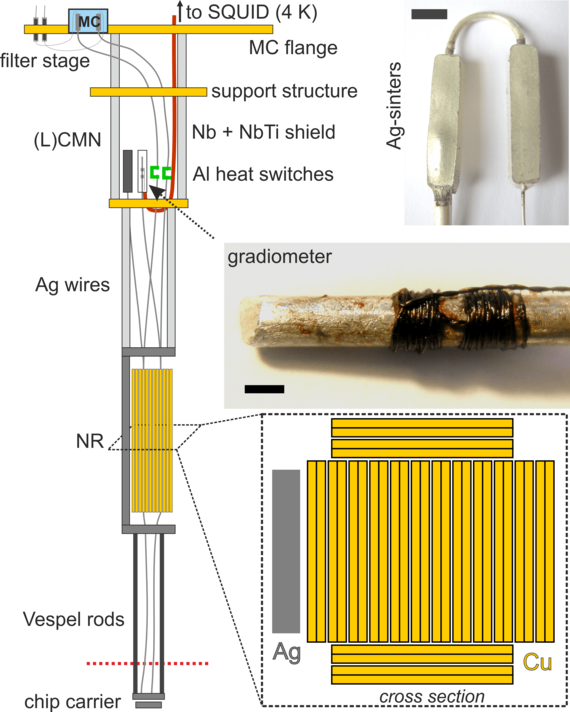 This project was established as a part of the European microKelvin project, which had the goals of spreading the low temperatures community and build up accessible low temperature facilities for different research groups. This project attempts to achieve cooling of electronic devices below 1 mK for transport measurements: The μK regime would then allow the exploration of new physics such as novel nuclear/electron spin phases and fragile fractional quantum Hall states with applications in topological quantum computing. However, cooling nanoelectronic devices below 1 mK is a challenging task, because bad thermal coupling between the sample and the fridge and intrinsic heat leaks increase the temperature of the sample above the base temperature of the fridge.

For this reason , we build state-of-the-art magnetic cooling setups to cool nanoelectronic devices below 1 mK. The refrigeration scheme relies on the cooling of the nanostructures through the leads taking advantage of the electron-eolectron interaction. In our setups, each one of the experimental leads has its own magnetic refrigerator.

We demonstrate magnetic cooling of the electrons inside the magnetic refrigerator down to 150 μK with high refrigerator efficiencies typically above 80%. A further success of this project is the cooling of several metallic and superconducting tunnel junctions well below the base temperature of the fridge, pushing to the lowest temperature so far measured in such devices.

For the future, the focus of the project is moving to the on-chip magnetic cooling to directly cool the electrons inside the device.