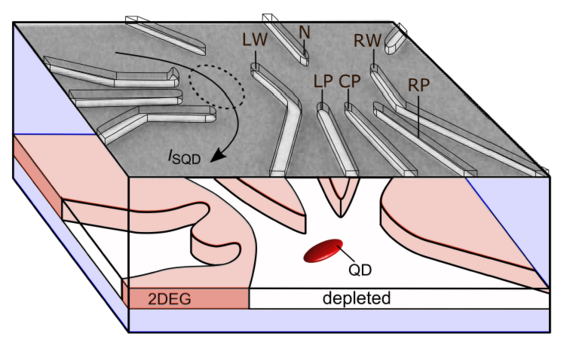 Our research in GaAs spin qubit devices focuses on spin relaxation, g-factor and the quantum dot orbitals. In these systems, voltages applied to surface nanogates on top of a GaAs/AlGaAs heterojunction locally control the density of an underlying two-dimensional electron gas to form a potential trap which contains only one electron (see Figure).

Manuscript of experiment in preparation.

The qubit energy of a Loss-DiVincenco spin qubit (spin-1/2 qubit) is given by the Zeeman energy. For electrons, this energy is proportional to the strength of an external magnetic field. The g-factor is the proportionality constant of this relation. We investigate the correction to the bulk g-factor in GaAs quantum dots and found an isotropic and an anisotropic correction. In contrast to other systems with much stronger spin-orbit interaction or holes as a charge carrier, such as Germanium-Silicon core/shell nanowires or silicon FinFETs, these corrections are much smaller in GaAs and are therefore challenging to quantify experimentally 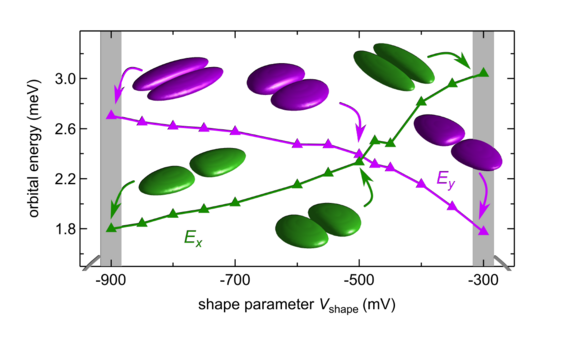 Beside of the Zeeman energy, the orbital energy of the quantum dot which hosts the spin qubit is of major importance for the qubit performance. A prerequisite for spin manipulation is the ability to create a superposition of the two spin states, spin up and spin down. The major process which mediates this mixing and creates this superposition is spin-orbit interaction. This relativistic effect leads to a coupling between the spin and the orbital degree of freedom of the electron confined in the quantum dot. Therefore, processes which involve this type of interaction depend strongly on the electron orbitals given by the confinement of the quantum dot. In our devices, the confinement of the quantum dot is controllable which allows us to study these orbitals and its influence on spin qubit performance. 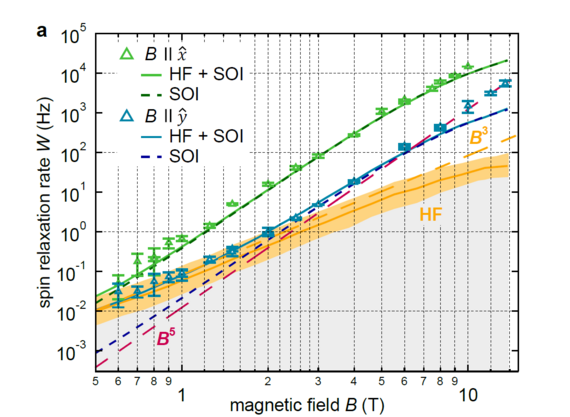 Due to a controllable quantum dot shape, we were able to map out different contributions of the spin-orbit interaction - an important physical effect exploited for all-electrical spin qubit manipulation- in our GaAs spin qubit devices by investigating the spin relaxation anisotropy of the system. Due to the unprecedented control of our quantum dot, we were able to discover signatures of nuclei-induced spin relaxation, a process which was predicted almost 20 years ago [1]. Further, we established a new record spin relaxation time of one minute, twice as long as it has been reported in silicon [2].