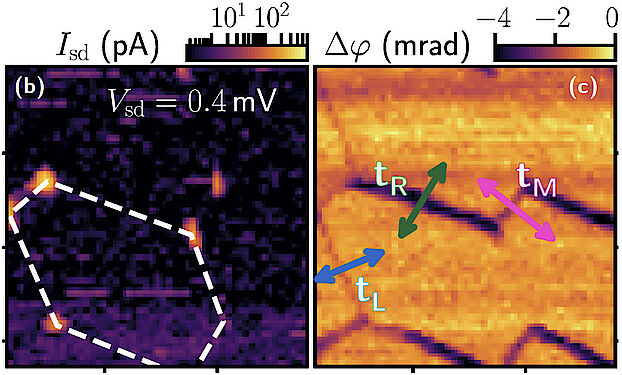 Hole spin qubits in Ge/Si core/shell nanowires are promising candidates for scalable quantum information processing. Readout based on the current through the nanowire is easy to implement but also slow and not scalable. We employ a high-impedance, magnetic field resilient superconducting microwave resonator based on a NbTiN thin-film and couple it to a double quantum dot in a Ge/Si core/shell nanowire via one of its plunger gates. This opens the door for dispersive sensing as well as spin-photon coupling which was predicted to be particularly strong in these nanowires due to their exceptionally large spin-orbit coupling. Dispersive sensing can be done directly on one of the qubit gates, reducing the qubit footprint compared to traditional sensing, thus improving scalability. But dispersive sensing detects charge transitions only when the tunnel rate is close to the resonator frequency, making the detector insensitive when the rates are far off.

Here, we are sensing with an adjacent dot (right side) which is coupled predominantly to its reservoir, while we drive the plunger gate voltage (left dot) more and more positive, pushing out hole after hole over a large range of plunger voltages. This method remains very charge-sensitive since the sensing transition is not (much) affected by the large voltage changes on the plunger since it is located relatively far away. This allows us to deplete the dot of holes until no further transitions seem visible and the dot is presumably empty, though many charge switchers appear in this relatively unscreened regime. This work opens the door for dispersive qubit readout and future spin-photon coupling on the Ge/Si nanowire platform.

Collaboration between the Schönenberger and Zumbühl groups at the University of Basel, supported by NCCR SPIN of the Swiss NSF.